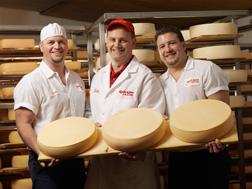 Roth Kنse represents generations of cheesemaking, originating in the 1800s in Uster, Switzerland. The Roth family became known for their knowledge and expertise in the cheese industry, and at the beginning of the 20th century began importing to the United States.

Recognizing an opportunity to craft excellent specialty cheeses in America, Fermo Jaeckle joined with his cousins, Felix and Ulrich Roth, to found Roth Kنse USA, Ltd in 1991. Instead of importing cheese, the focus became crafting and curing European-style specialty cheeses in America’s Dairyland. Green County, Wisconsin was a natural home for the Roth Kنse cheese factory, not only for its lush landscape and high quality milk supply, but also because the area is commonly referred to as “Little Switzerland.”

“Adventures in a Chinese Kitchen”
Cheese, Vanilla, and International Sauces

"I am really enjoying your cooking classes. The kitchen space is wonderful with all of us preparing food at different work stations. My cooking sure has improved and your classes have given me inspiration and brought me out of the "same old" menu. Thanks"