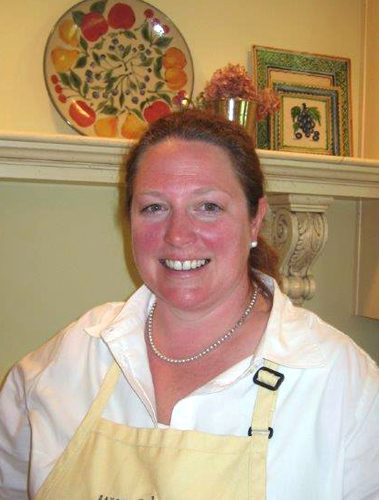 Amy is gifted with a great talent of creating delicious and trendy food as well as entertaining people. She has been teaching at the Savory Spoon for 10 years and has a strong following. Amy has a grand library of cookbooks and prides herself in being up to date on all the latest culinary trends. She received her Bachelor’s of Science in Hotel/Restaurant Management from State University of New York at Plattsburgh.

Her passion for fabulous food reaches every student in every class. We call her the culinary Queen Bee. She has had her local catering business feast for 10 years and has volumes of satisfied customers. We are happy to have her on our in house teaching team! 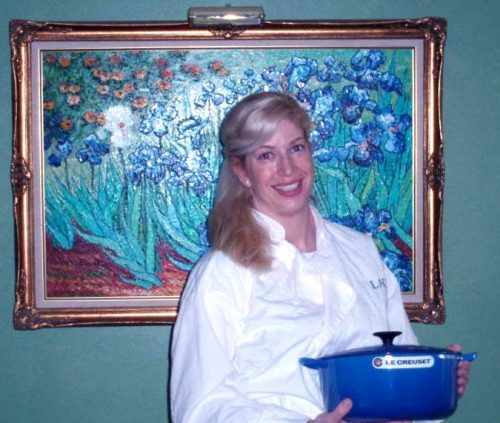 Gifted with dual talents of being a great chef and entertaining people, Laurie has been teaching cooking classes for years both privately and with culinary venues; Williams-Sonoma, Whole Foods, The Savory Spoon, Orange Tree Imports, The Willy Street Coop, All Through The House and is a guest instructor at the Madison Food & Wine Show. Laurie prides herself in using both the freshest ingredients, along with organic and locally grown foods.

She is a culinary expert when it comes to knifes and the science and anatomy of cuisine. Her special traits lie in baking, desserts, comfort foods, vegetarian and eclectic dishes. 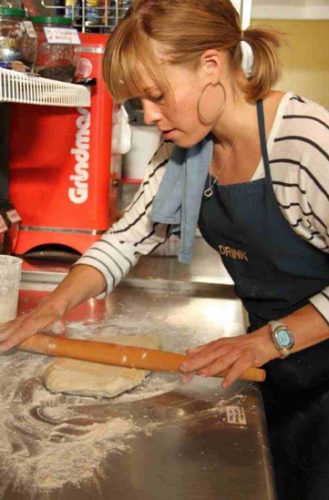 Rachel is a cookie, croissant and dessert master, and the owner of Analog Coffee in Sister Bay. Her Aunt Ruthie’s house has a special place in Rachel’s heart. It always smelled of the most delicious homemade cookies. Ruthie began to teach Rachel all the secrets of cookie making when she was just a wee sprite. Now, with years of practice, Rachel creates delicious cookies and pastries for all to enjoy! Also, she is our Grand Dam of baking and fills classes for buttery croissants and baking basics, too. 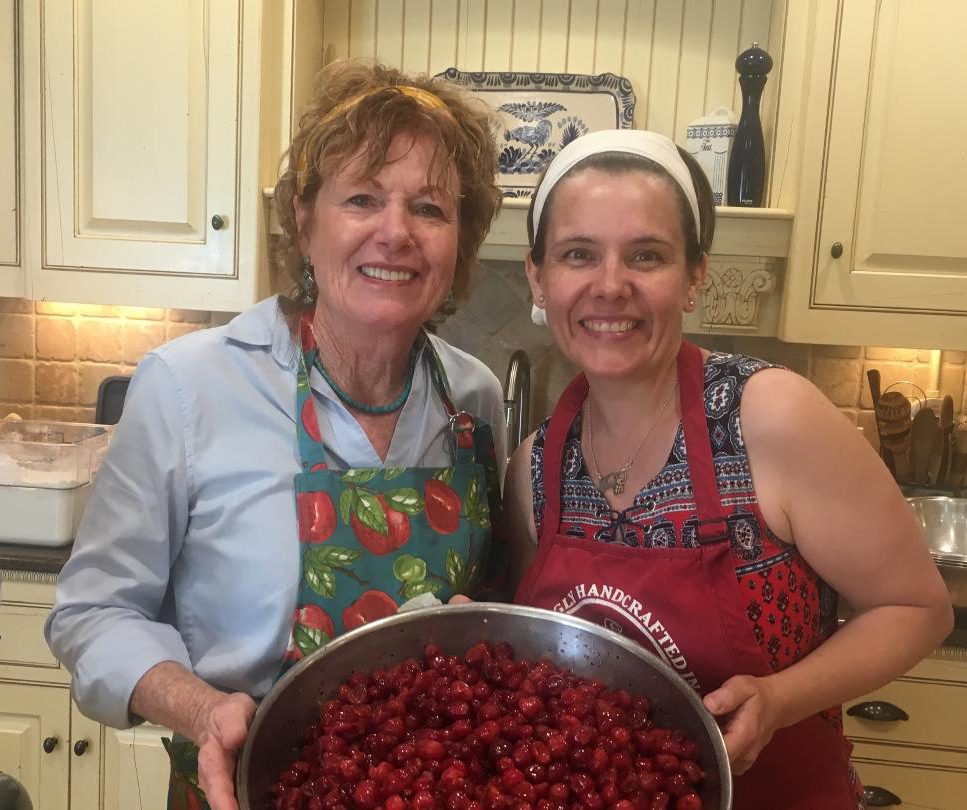 I started at Sweetie Pies even before it opened way back in 1995. My mom, Susan, was the original owner and I worked with her for the first 5 years. My titles included everything from “clerk” to “cleaning crew” to “head of wholesale” to “production manager”. That last one is why I’m teaching a pie making class. For a couple years I was in charge of every pie that got made at Sweetie Pies.

My partner Chris and I bought Sweetie Pies in April of 2017 from some great friends who owned it in between my mom and I. Chris is now the production manager among a great many other things and I usually cover the office type stuff. I love to get in the kitchen and help with pie making as often as I can. It makes my heart sing!

My teenage daughter and a couple of her friends help out at Sweetie Pies and Chris and I are looking forward to the day that our twin boys will be able to wield rolling pins too.

Olivia has a great personality and the pie knowledge to make each student smile and go home confident with a delicious pie to share and enjoy! 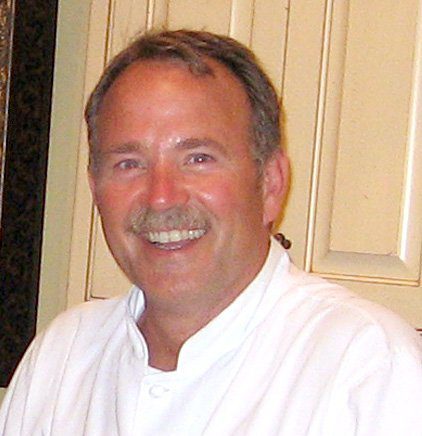 Mike Mead is the Chef and owner of the Shoreline Restaurant in Gills Rock, Door Counties most northern restaurant. Mike and his wife Mary have owned the restaurant for 18 years and he is the primary Chef. Mikes passion for salmon and whitefish dishes have visitors coming from all over the country to their restaurant in Gills Rock. Their slogan is “Eat The Whitefish” The dining room has a most spectacular view and makes one think they could actually see a salmon jump in the picturesque bay.

Mike is a great teacher and with his contagious smile, students flock to his informative and entertaining classes. 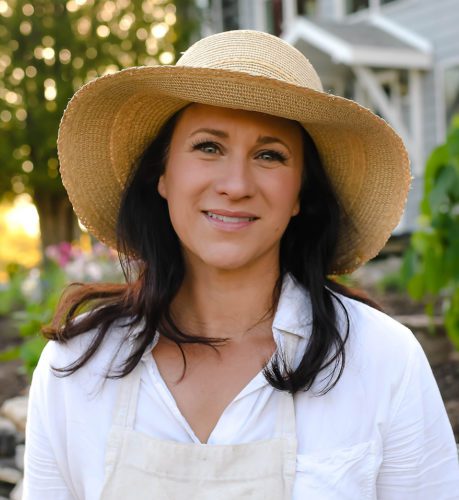 From France to the Farm – join French lifestyle blogger and cookbook author Angela J. Reed as she takes you on a journey from the streets of Paris to the rows of a kitchen garden on a quiet farm.   You’ll learn recipes that are grounded in the country roots of the farmer housewives in her family and infused with a little French flair.

Angela is the author of the blog Parisienne Farmgirl, the author of From France to the Farm and produces a weekly show on YouTube called, “Everyday Château” which features the de-constructing a local modern home to resemble an 1800’s French farmhouse.  At her Sister Bay farm, Sûr le Rocher Country House and Gardens, she raises much of her own meat, eggs and produce in an expansive potager or French kitchen garden.
Angela is passionate about encouraging others to create beautiful life and simple moments around the table three times a day. 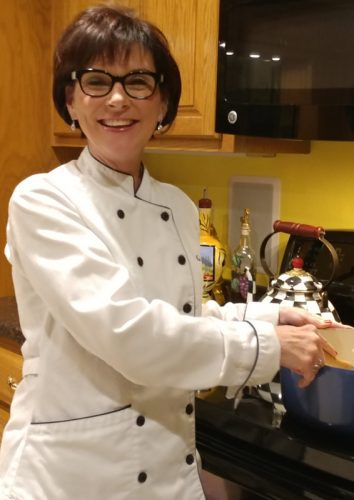 Chef Gail Rueckl, from childhood on had a passion for food. She has over 40 years experience working in the Food Industry, helping shape the chef she is today. Using the knowledge she gained from her work experiences, Gail decided to turn her passion into a career.

She earned an Associates Degree in Culinary Arts through Nicolet College in Rhinelander, WI in 2011.

Gail’s experiences started at 16 years old working at an historic diner in Green Bay, WI called Sneezers, where retired Packers coach Vince Lombardi would frequently have lunch. She spent years working for General Mills as a Grocery Store Merchandiser, and eventually took a job with Kraft Foods as a Sales Representative. After, earning her culinary degree, Gail was hired as a head baker, for a private girls camp in Minocqua, WI, serving divine desserts to over 400 girls. In addition to a baker, Gail has worked as a private chef offering in home culinary experiences, in addition to a recipe tester for Leite’s Culinaria and America’s Test Kitchen. Wanting to share her passion and knowledge, Gail started working as an assistant and teacher at the Savory Spoon Cooking School.

Chef Gail has a strong passion for all kinds of food, but loves to focus on beautiful, healthy, and tasteful ingredients. She enjoys international cooking styles and uses travel to help with continuing education and broaden her knowledge of the various styles of cooking. 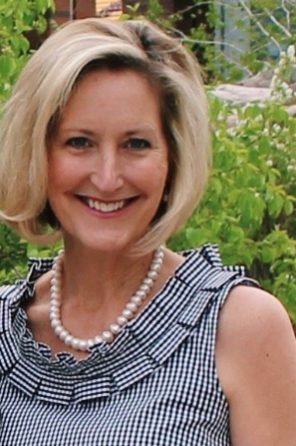 Are you interested in tablescapes that include beautiful floral arrangements? Intrigued by a centerpiece you saw at your local florist? Or, simply needing technique skills to arrange flowers you purchased locally at the market?

We’ll provide all the materials & prep *(similar to our cooking classes), so you can arrive ready to have fun and create something beautiful. Class size is kept to a minimum; the goal is for you to leave smiling, having created your own floral story.

Flowers are my passion, from gardening to fresh arrangements. I bring along floral design experience I gained on the East Coast. I take pleasure in being surrounded by beauty and look forward to sharing my talents & creating something pretty during our floral workshops together at The Savory Spoon. 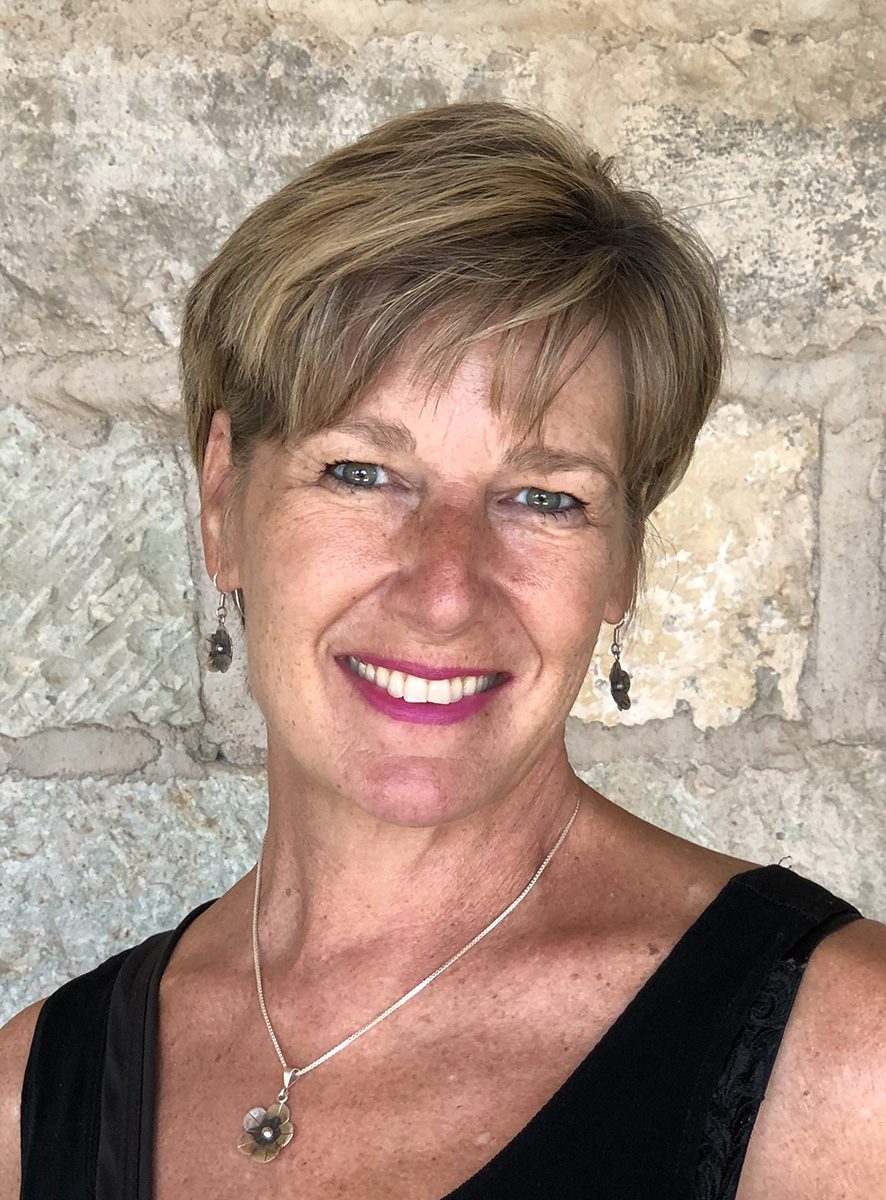 Originally from the Milwaukee area, Melissa Utschig’s passion for travel, cooking and entertaining earned her recognition in the Milwaukee Journal Sentinel, where she was featured as a Great Host in 2016. Melissa entertains friends with elaborate ethnic-themed cooking parties – where they do all the cooking. She plans the menu, decorates the table, creates a music playlist, organizes the ingredients for each recipe on trays and prints out the recipes. Her cooking parties became so popular, she was asked to donate them for auction at various philanthropic events.

Melissa’s goal at the Savory Spoon’s cooking classes is for you to enjoy cooking a delicious, globally inspired menu that you can use to host your own parties and to try new recipes you will want to make over and over again.

No matter what the cuisine, Melissa loves all aspects of cooking and entertaining. That joy, combined with her artistic background, love of food and friends, a career in marketing and event planning make her a natural for teaching at the Savory Spoon. After a lifetime of vacationing in Door County, Melissa and her husband Jeff now call Ellison Bay home. 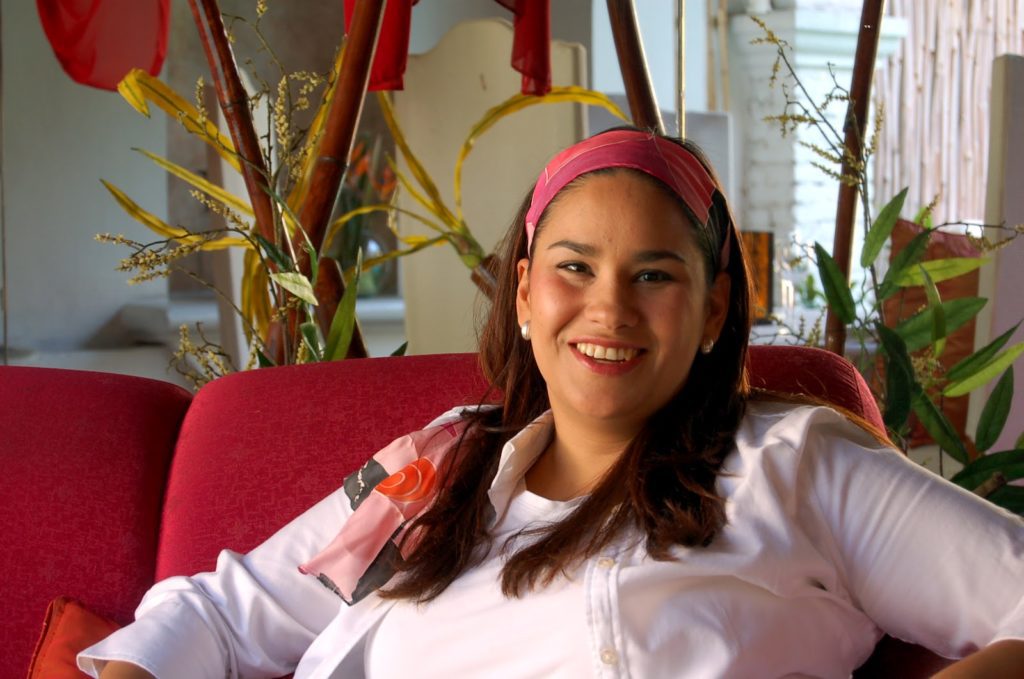 The inspiration for Chef Ana’s recipes and hospitality grow out of her long, rich family history in central and northern Mexico. Her abilities as a chef are intricately linked to her close relationship with her mother, aunts, grandmothers and great grandmother, as each passed down their culinary wisdom. She has taken this extensive knowledge and incorporated it into a culinary repertoire that includes traditional central and northern Mexican specialties as well as nouvelle Mexican cuisine using traditional ingredients in new and gastronomically adventurous ways.
Passionate about Mexican cuisine and its preparation since childhood, Ana had originally embarked upon a career in business. She received a B.A. from the Instituto Tecnologico y de Estudios Superiores de Monterrey in 1998, and planned on attending The Wharton School following in the same path as her father. That changed when she met her future husband, Rob Anderson, who saw in her a unique gift that combined her vast knowledge of Mexican cuisine with her talent for teaching and communicating.

"I am really enjoying your cooking classes. The kitchen space is wonderful with all of us preparing food at different work stations. My cooking sure has improved and your classes have given me inspiration and brought me out of the "same old" menu. Thanks"