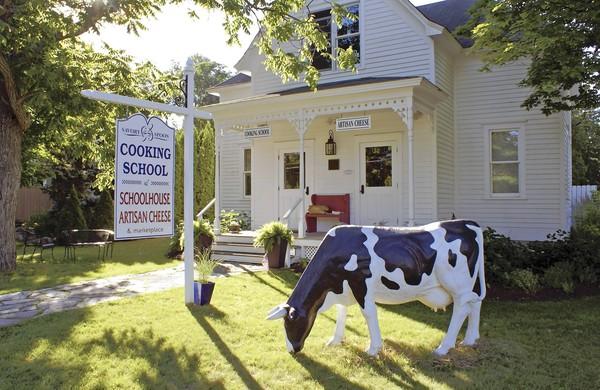 ELLISON BAY, Wis. — — The sweet aroma of onions caramelizing in a skillet is impossible to miss as vacationers enter the classroom in an old schoolhouse not far from the northern tip of Wisconsin’s Door Peninsula.

The 16 students, a mix from children to retirees, didn’t come for a traditional lesson in English or math. Instead, the visitors from northern Illinois and southern Wisconsin gathered to learn how to make palate-pleasing pizzas from scratch.

“I want to thank you all for coming and spending one of your Door County evenings with me,” said Janice Thomas. As the co-owner of the Savory Spoon Cooking School, which shares an 1870s building with her artisanal cheese shop, she’s been both headmistress and teacher since she started offering classes eight years ago.

“Our school is all hands-on, and the reason for that is, if you want to see a demonstration, you can do that 24/7 on TV,” she noted before distributing the prepared dough, a necessity due to the time it takes to rise.

From May through October, four times a week, guests are invited to learn new skills or polish existing ones at the Savory Spoon. For many, it’s a departure from more traditional Door County activities such as cycling or sailing or hitting a fish boil.

“As the kids get older, you want to expand the bag of tricks a little bit,” said Jana French, who tackled a barbecue chicken pizza with husband Peter Gotsch and their children.

French and Gotsch, who live in Chicago’s Hyde Park neighborhood, have been vacationing in Door County each summer since before their children, Olivia, 11, and Thomas, 9, were born. They previously had taken cooking lessons together, but the pizza class was their first during a family trip.

“The kids are getting more enterprising with their palates, and we discovered that when we cook together as a family or take classes together, it’s one way to introduce the kids to new foods,” Gotsch said.

Janice Thomas is cheery, personable and engaging as she moves between workstations, offering encouragement and tips.

To “neutralize the fear,” as Thomas puts it, the recipes range from easy to challenging.

The favorite coming out of the brick oven for the late August pizza class was a bleu cheese, caramelized onion and walnut creation, but that was a departure from the typical three-hour sessions, during which a five-course meal is featured. More often than not, the menus incorporate local produce, including herbs from Thomas’ backyard.

The “Fall Harvest” menu to be prepared Oct. 4 is a good example. Working in groups, students will tackle courses that include wild mushroom and Montrachet crepes and parsnip-potato latkes with horseradish cream.

As the Savory Spoon prepares to shutter for the winter, five miles to the south, in Sister Bay, Terri Milligan is just getting her demonstration kitchen fired up for folks visiting Door County during what’s called “the quiet season.”

The co-owner and executive chef at the upscale Inn at Kristofer’s, Milligan has been offering cooking demonstration classes since the restaurant opened 20 years ago. She teaches one Saturday a month from October to May.

“I do this to generate business in the offseason,” she commented candidly.

Like Thomas, Milligan uses local ingredients when possible, often including the cherries for which Door County is famous. In fact, as her guests arrive, they’re offered a glass of kir, a blend of champagne and cherry juice.

“It’s a demonstration,” she explained. “You don’t have to be a great cook to come to the class.” That said, recipes are provided so people attending can practice at home.

Milligan’s Oct. 13 class will kick off her 2012-13 season in grand style. The menu reads like one from a fine French restaurant — she trained under a classic French chef, after all — but with Midwestern influences.

The meal begins with a smoked whitefish and brie pithivier (puff pastry). It’s followed by saganaki, a Greek appetizer with a saute of honey crisp.

From there, the menu moves on to a potato, kale and cheddar cheese torte and an entree of beef tenderloin in maple Hunt Country marinade. A cherry pie topped with coconut crumbs concludes the meal.

Best of all, after watching Milligan’s preparations, participants move from her second-story classroom to the dining room downstairs to, as a group, feast on the various delights.

November and December traditionally bring classes appropriate to the time of year. For the Saturday after Thanksgiving, in a luncheon class, she will create a menu featuring holiday fare, culminating with a buche de Noel, a French-style Yule log, for dessert.

Milligan and Thomas said the growing number of cooking shows on TV has helped business.

A few years ago “there was this fear of, ‘Oh my goodness, no one’s going to come to cooking schools anymore, no one’s going to read cookbooks anymore, because it’s all on television,'” Thomas said. “I can tell you the complete opposite (has happened). … Part of that is because people are allowing themselves to see it as a bit of entertainment.”